Here I wanna show you the growing , no sorry forging of my fishomat F-1 .
This piece had been made for the Forged Hope Contest from our Massive Voodoo friends .
As you saw ,if you had read the introductions to this contest , there had been a little storyline about how and what they wan`t you to build . By the way they put a lot of afford into it, to inspire you for the project .They built up own robots and even drawing a little comicstrip.

The only thing I got to do  was waiting for the miniature which by the way is from Piqui part of the cursed monkey crew and collect some ideas, how the project should look like and what will be the story behind it.

There had been so much ideas in my head like let`s go for an Grillomatic who prepares the barbecue ,or Django the lone robotic rider but last but not least the idea of the fishomat F-1 made it .
I thought I would be great to tell a story about a robot which crows his own personality while doing what he was made for .

So hopefully you will see what I wanted to tell with this what I did .
He should be something like a dreamer who is more interested in his environment and it`s animals than in his job .

That was a lot of bla bla bla
So here we go .
First I prepared the socket and the river bank and tried out different centermarks like the tree with the owl and the sign. 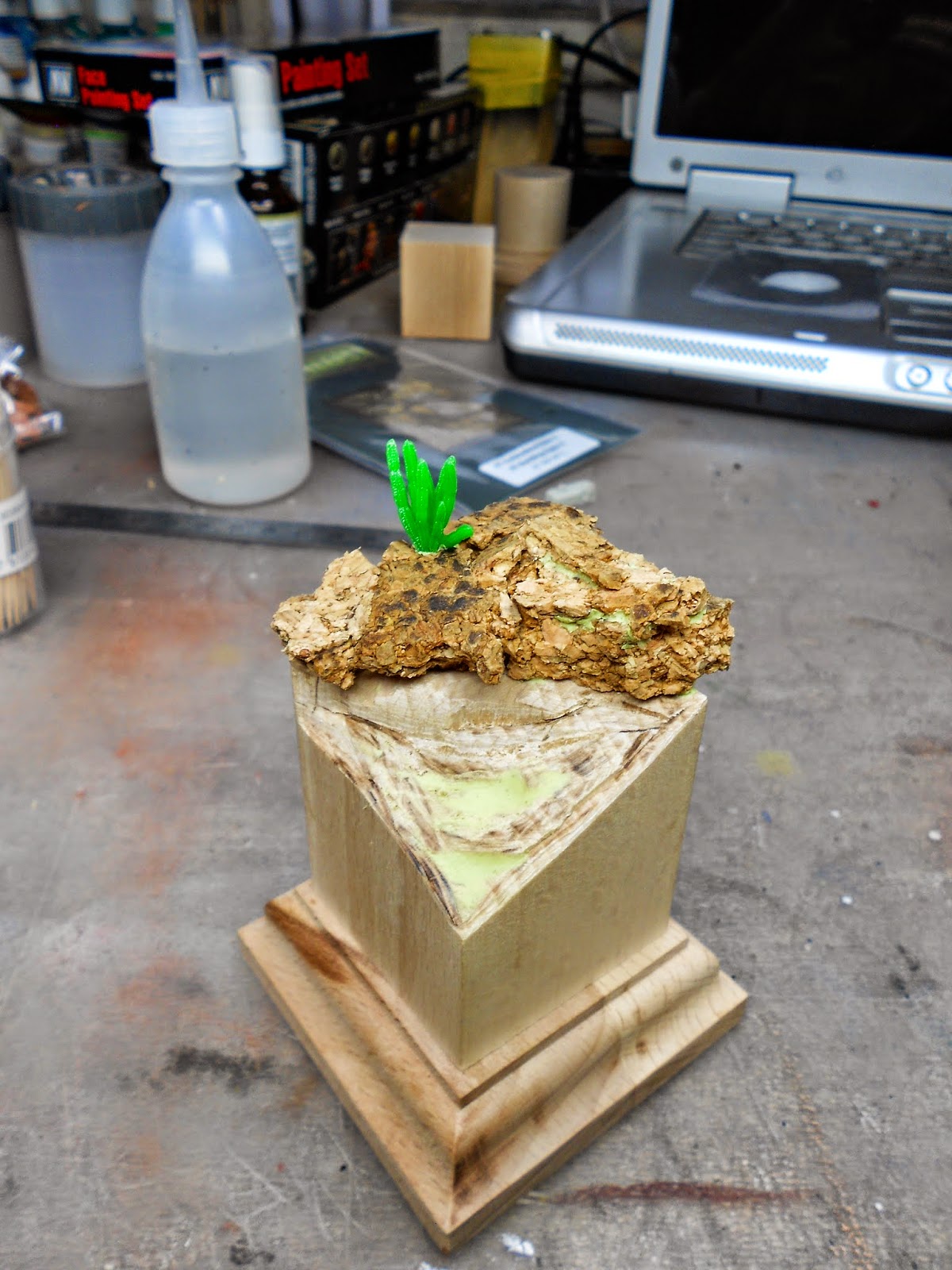 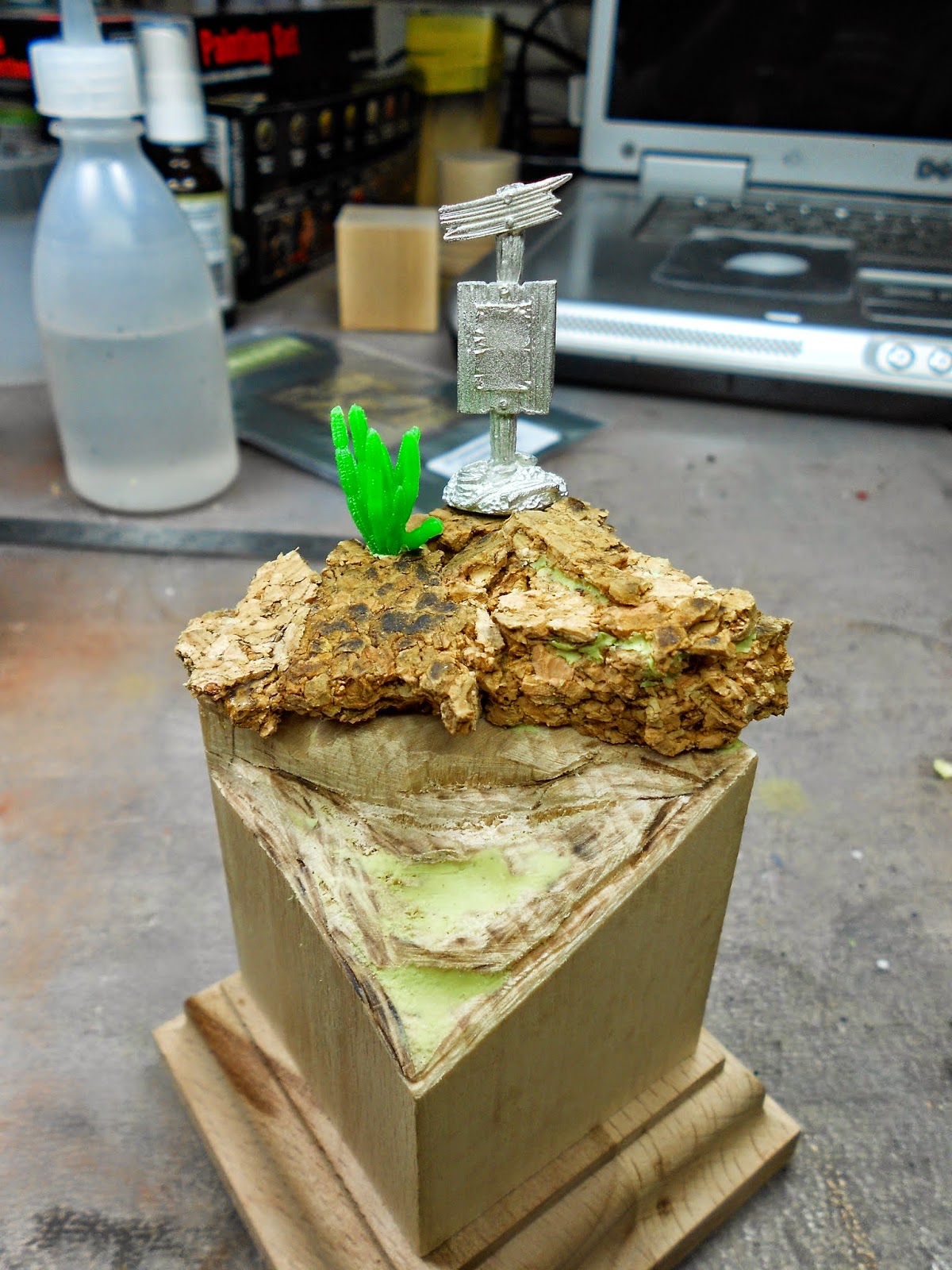 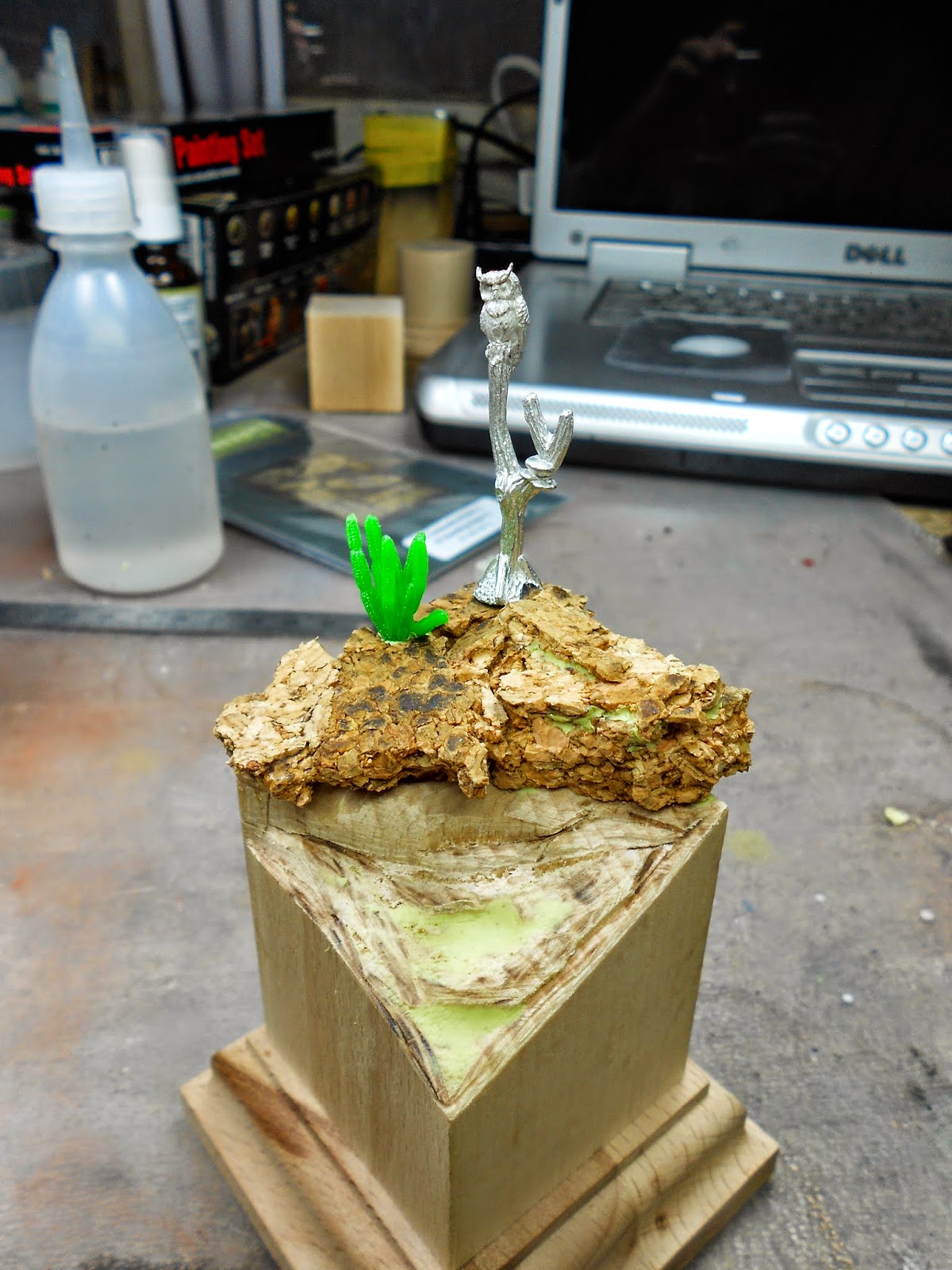 Meanwhile I also prepared the miniature itself, glue it together and tried out different poses. The quality of the cast is very good, very rare mouldlines but all the parts are very filigree and before I finished the project I broke his toes nearly ten times .Thanks god or anybody else for my sausage fingers.

After I had been happy with the positioning I started to glue some more structure to the base, like some more cacti to frame the miniature and an etched brass nuke sign to underline the post-apocalyptic scenery. 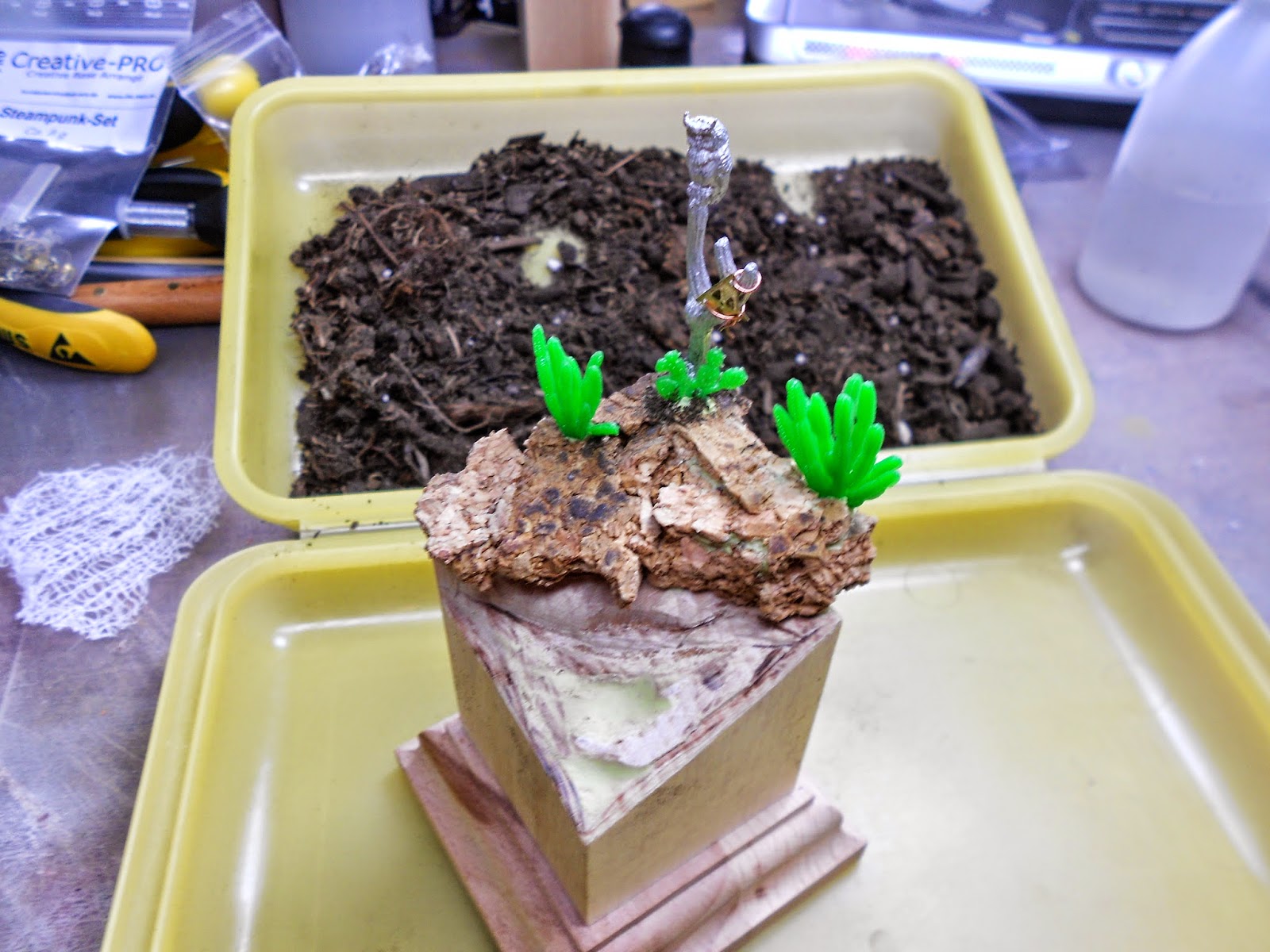 Next step had been the river bed , where I put some stones to built up a little cave and some lichen moss to give the impression of underwater plants. 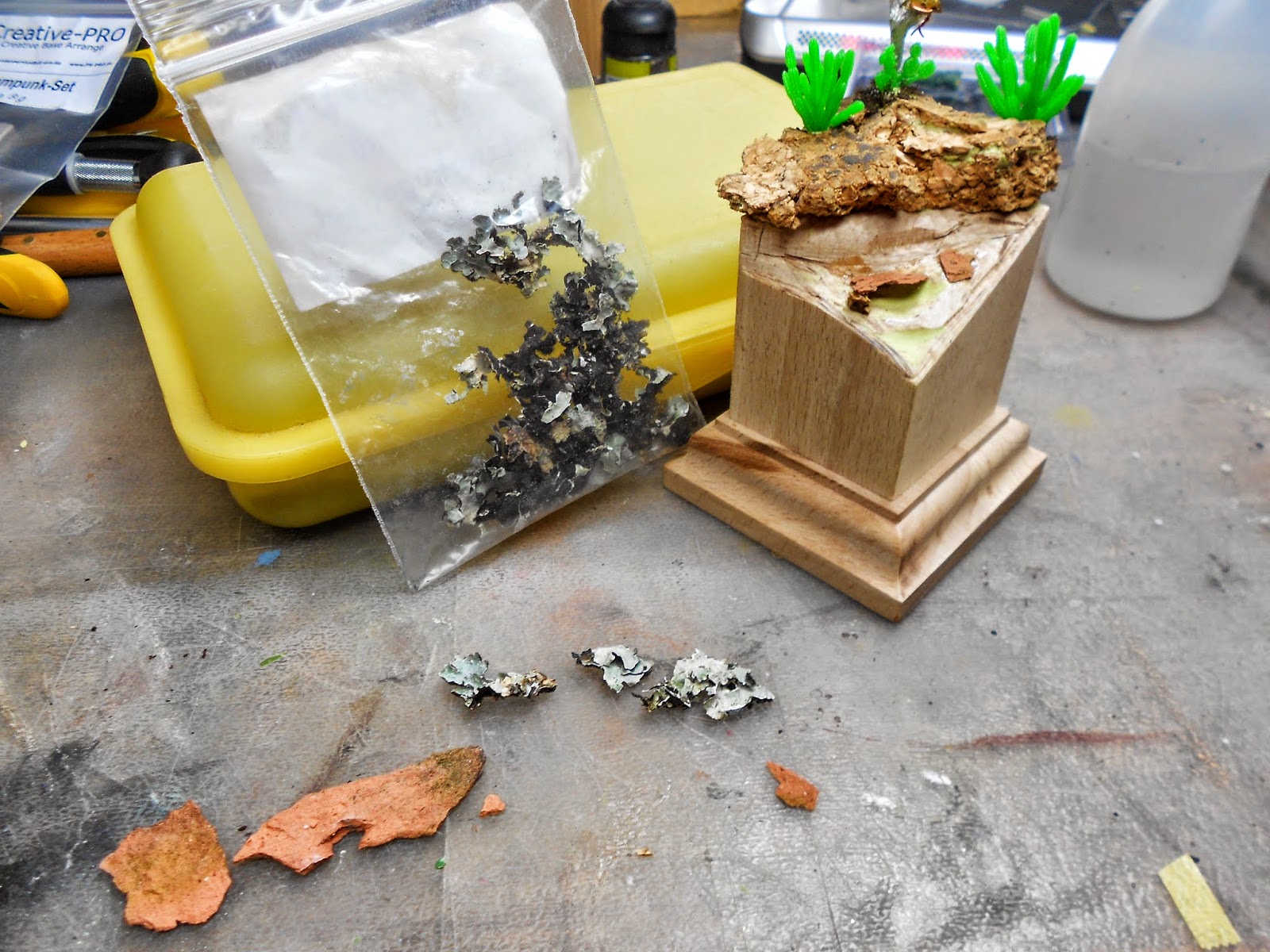 At least I throw on some earth and put on some masking tape on to the downer part of the socket cause this should get a wood glaze. 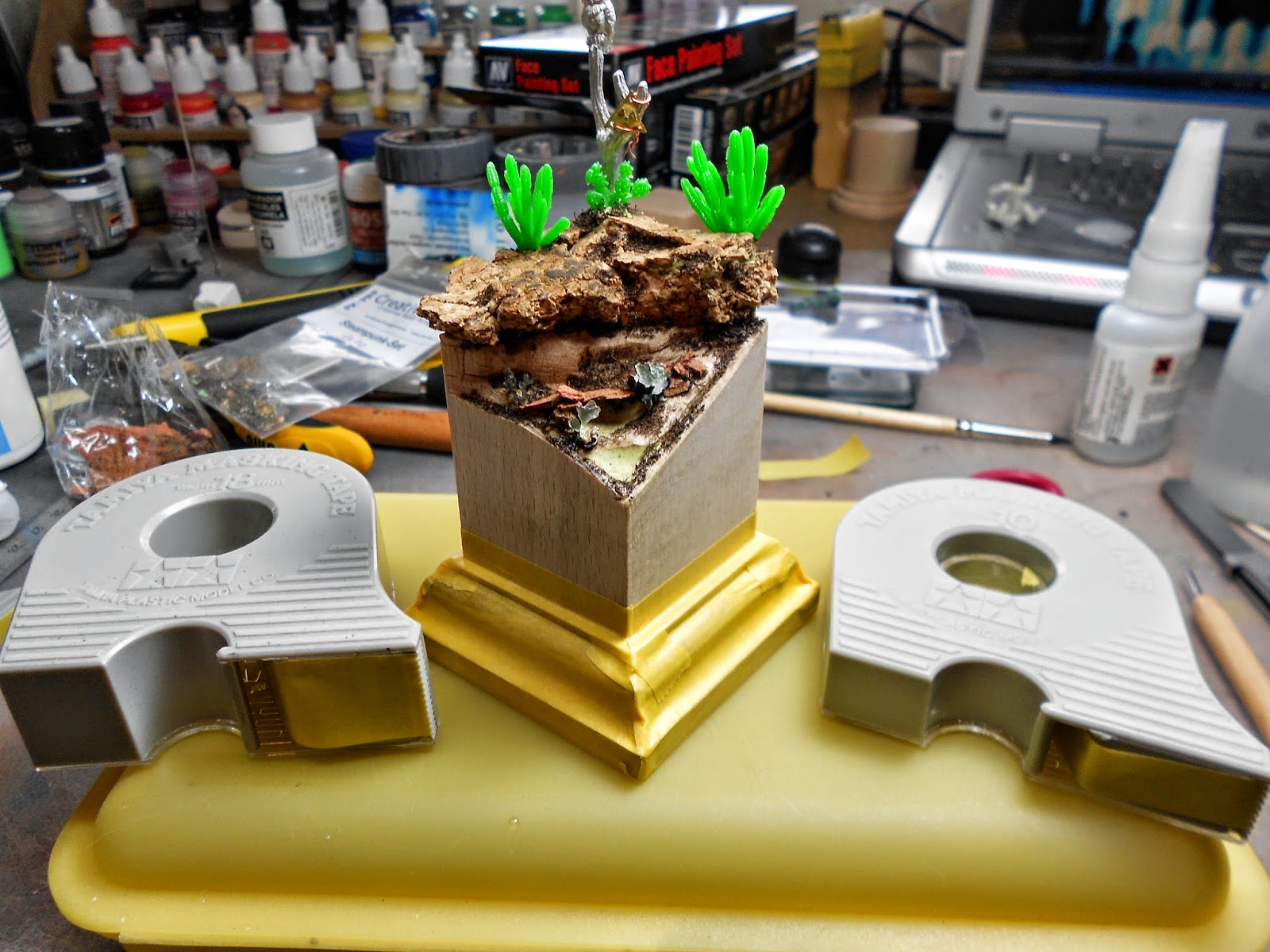 And then it was time to tell him that I am his father and that I gonna prime him with the aibrush in black & white. 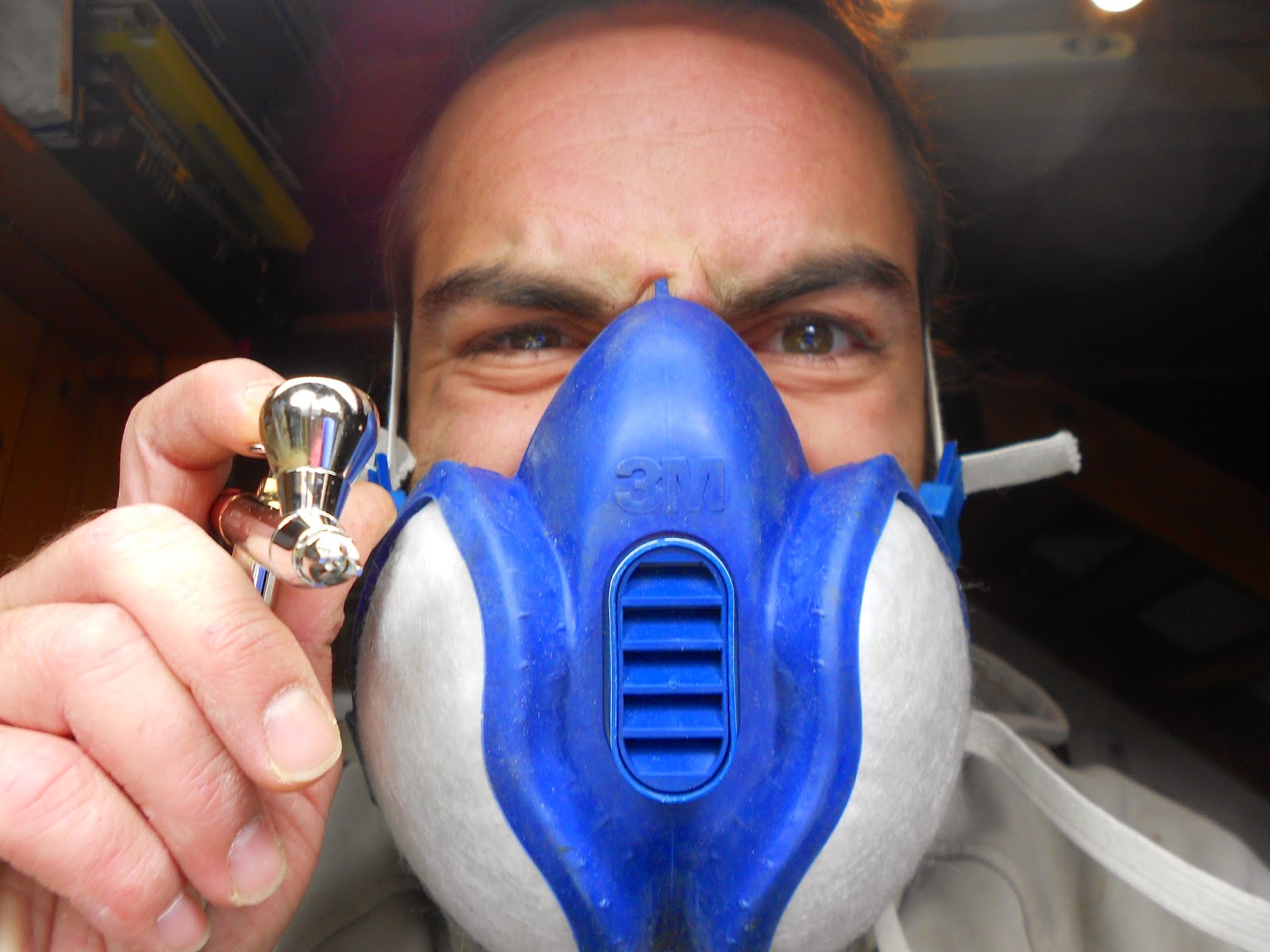 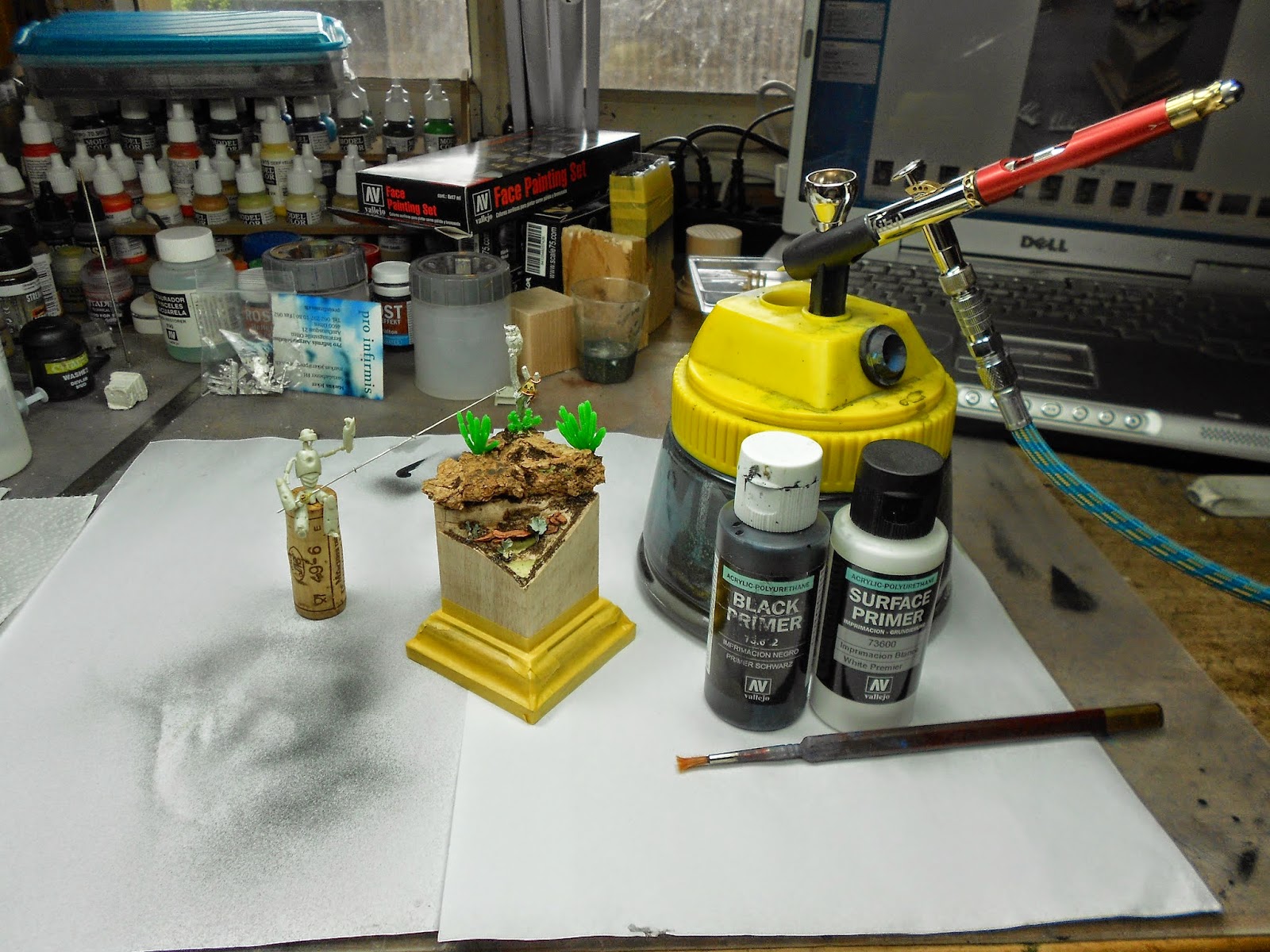 This I did with Vallejo primer black and white and that looked like this. 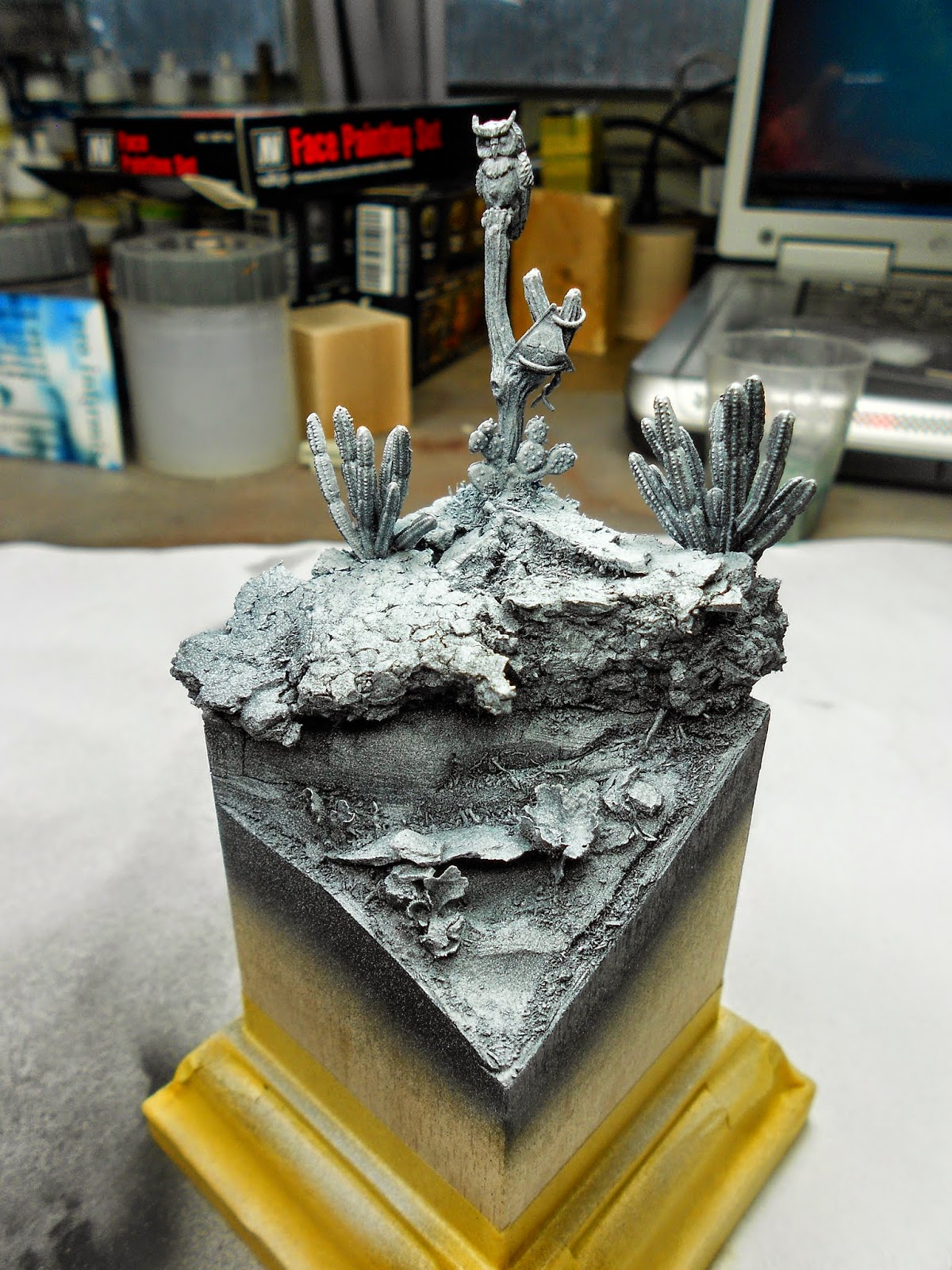 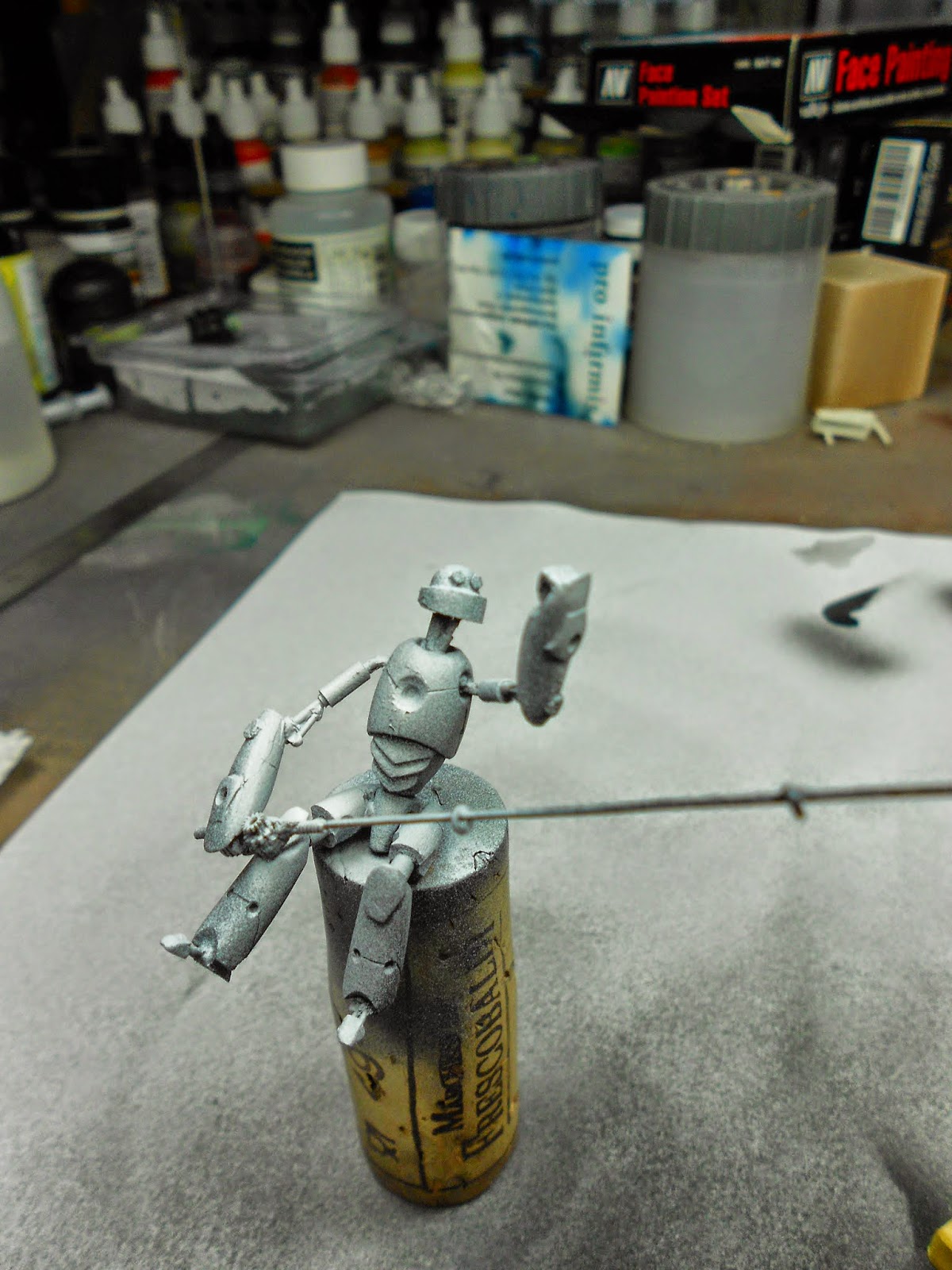 Next step I started with the airbrush and did the first colour sketches in green , after that was done I glazed on the lights and the shadows of the green and blocked out all metal parts in black. 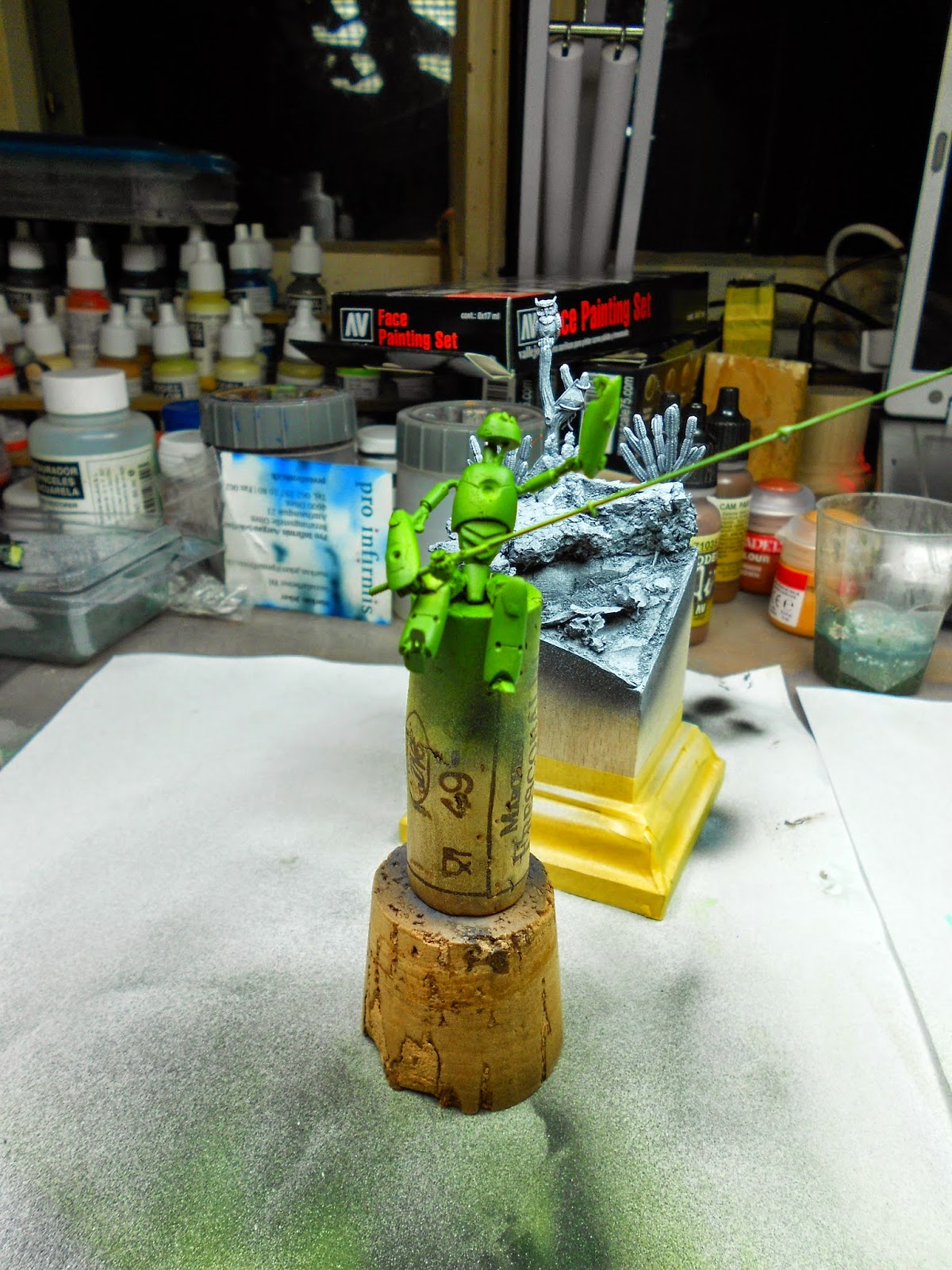 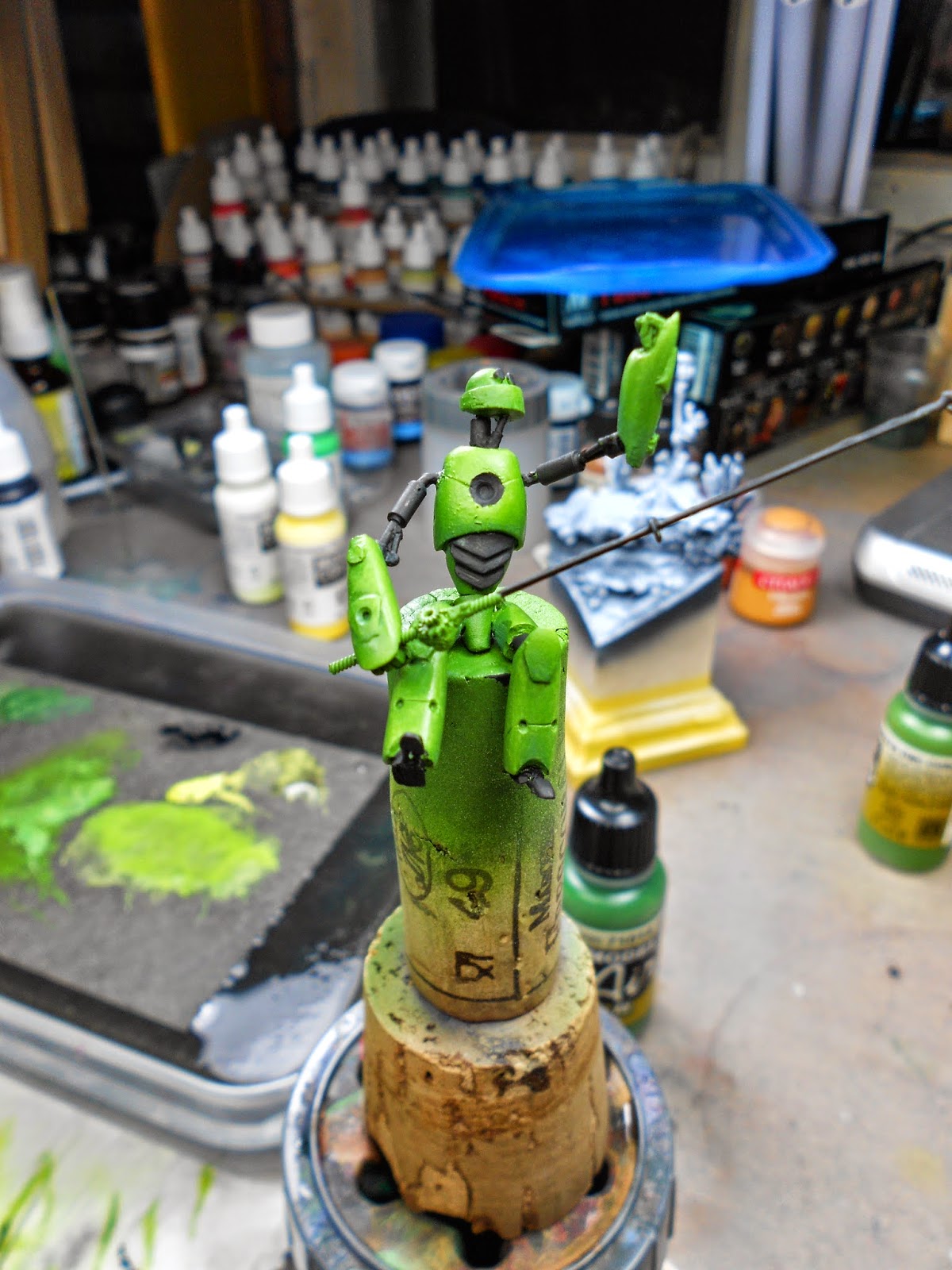 Then I did the metal parts by painting them with Scale 75 metal set and gentley washed them down with black , after this had been done I put on some rust from Modelmates .The Scale 75 series and those weathering colours of Modelmates you can get at Vlado`s shop. 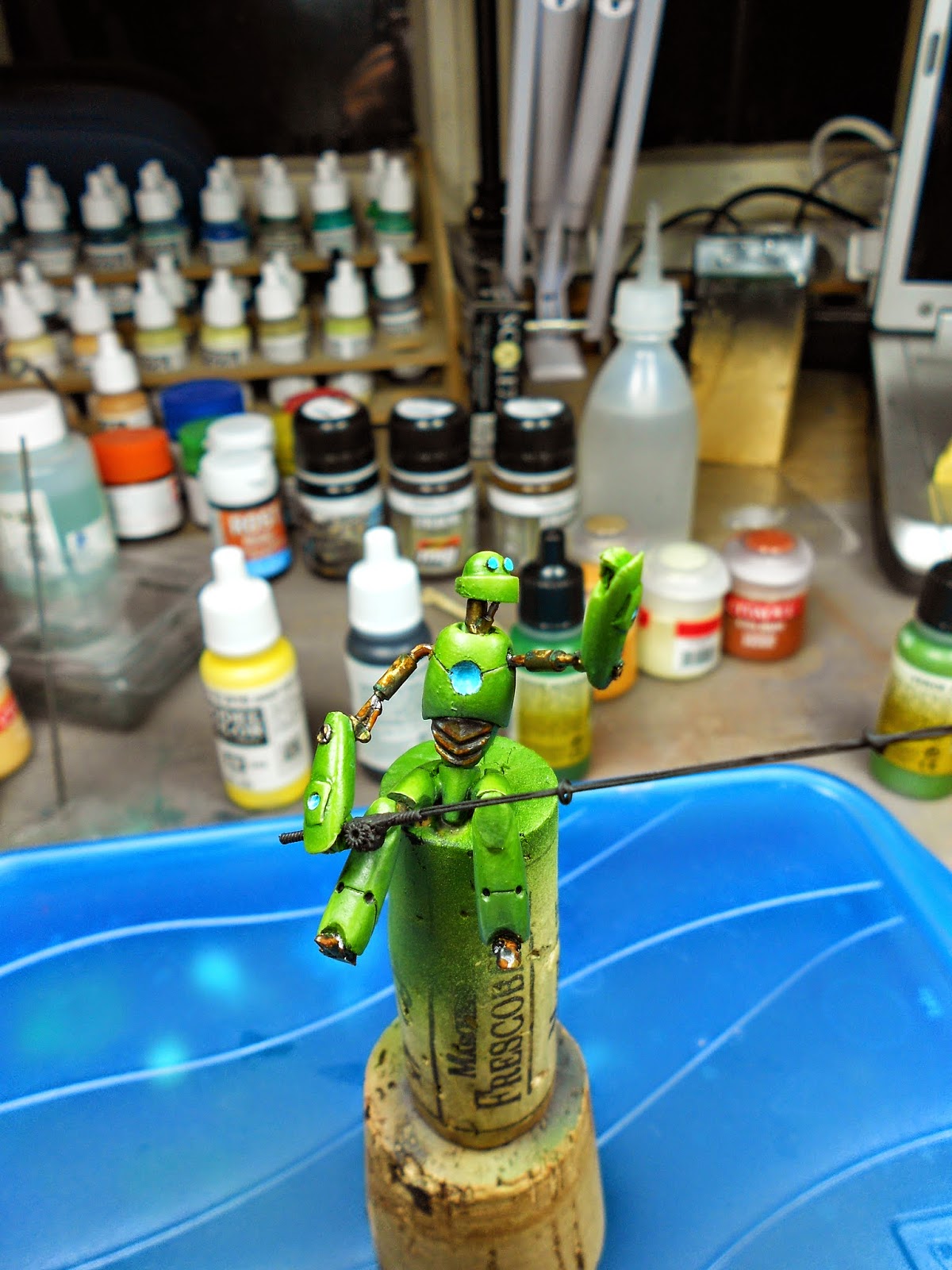 After I did the metal parts I realized that I need to force the contrast much more and also added some scratches and chipped effects to make it more interesting . 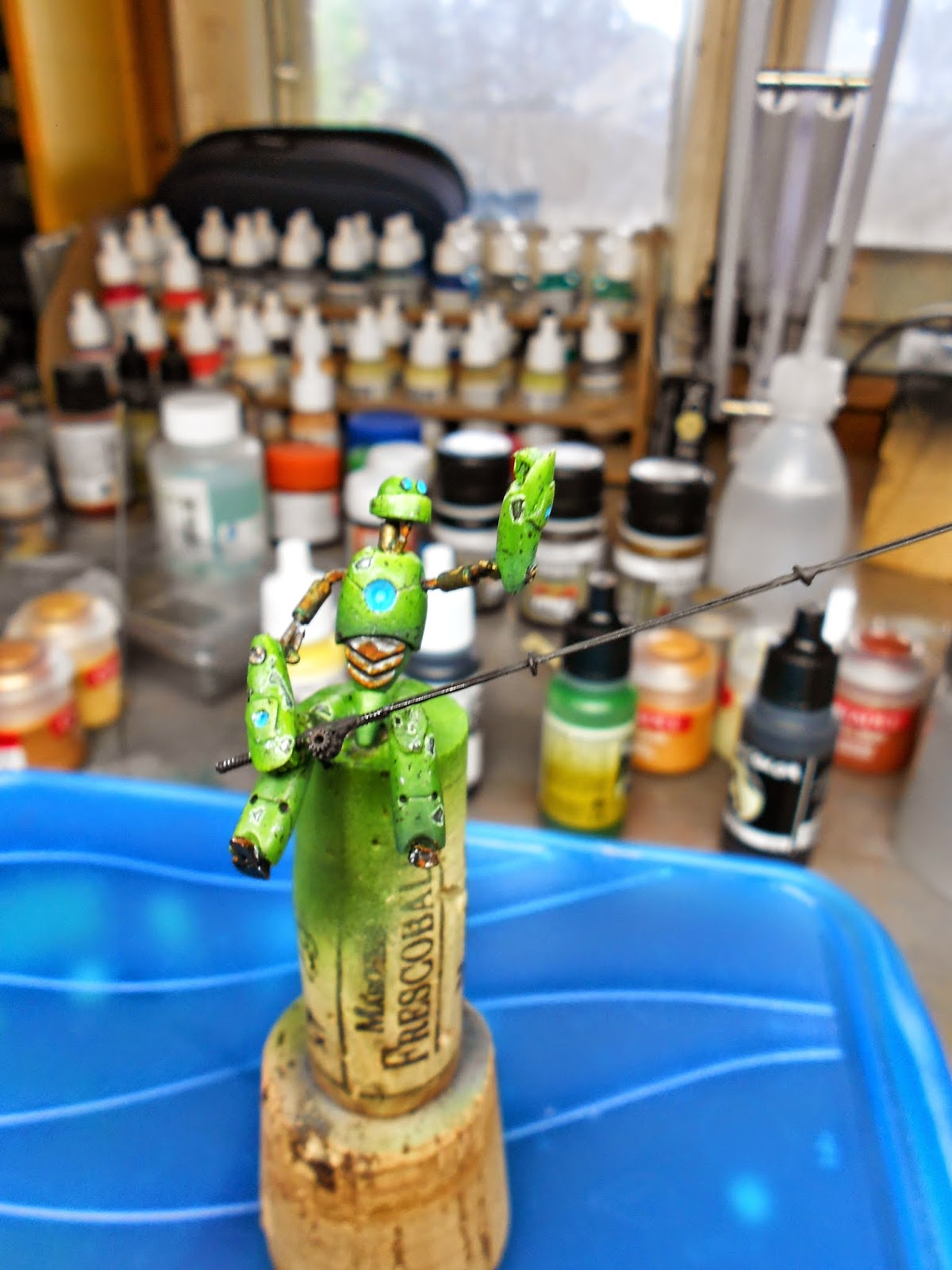 Next I focused on the base which I mainly painted in reddish earth tones . The cacti I painted in a more desaturated tone then the robot itself cause he sould be the main focus .
For the part which whould be underwater I also used the main earth tones highlited them with a medium fleshtone and added different green and blue washes on top.
To make the plants stand out more I painted them with a strong  turquoise and covered them with a pinkish colour and left the edges turquoise. 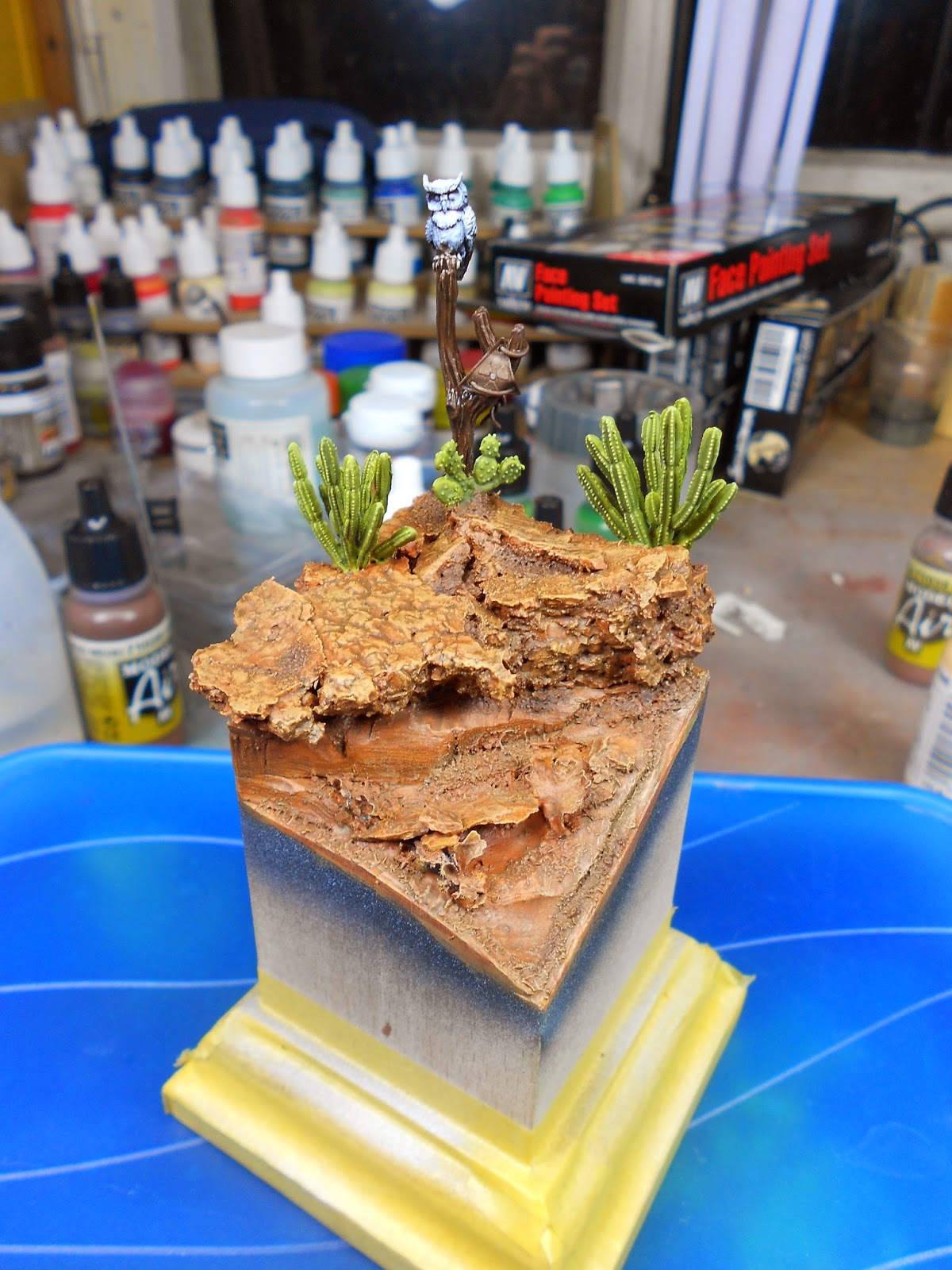 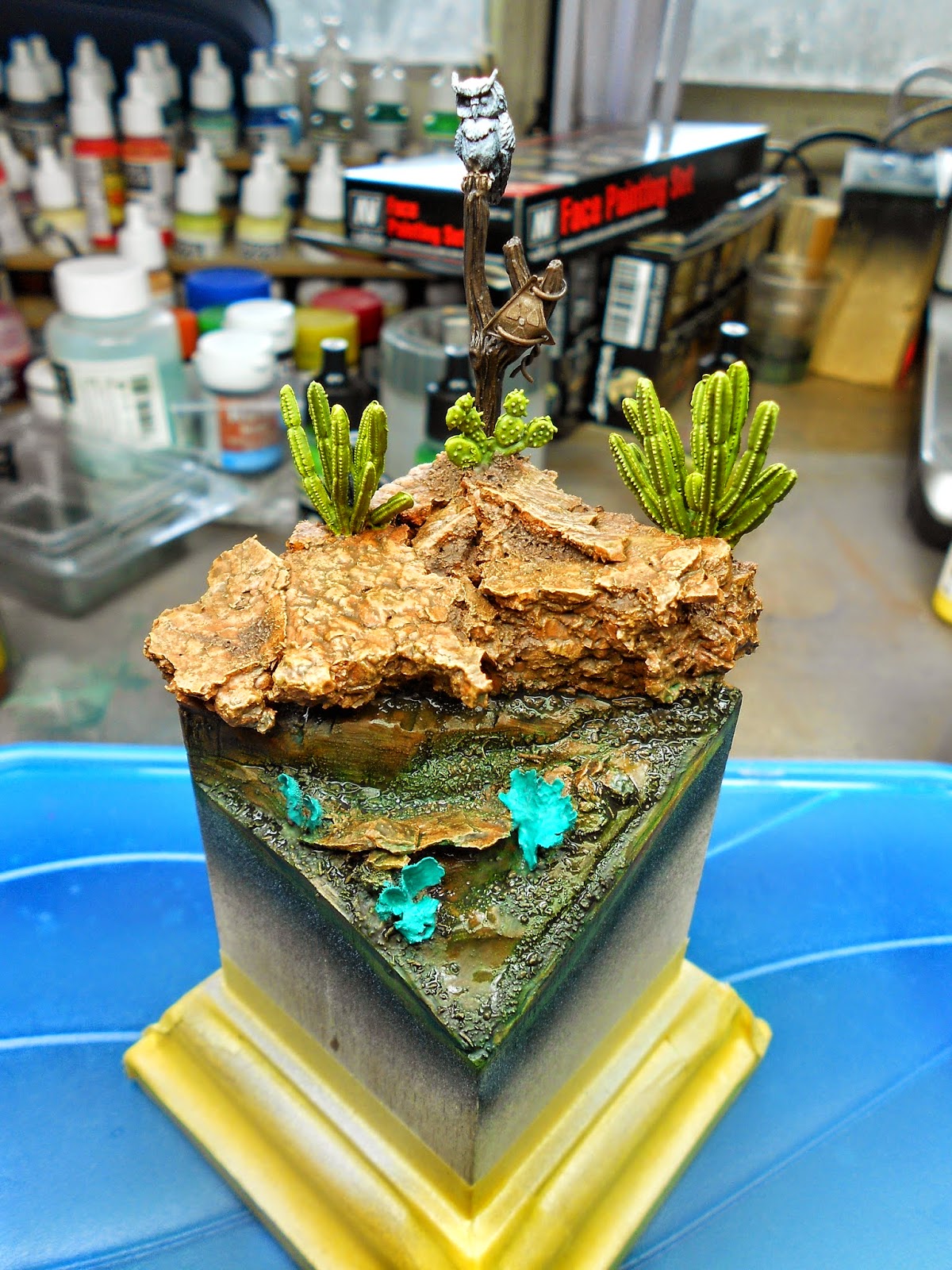 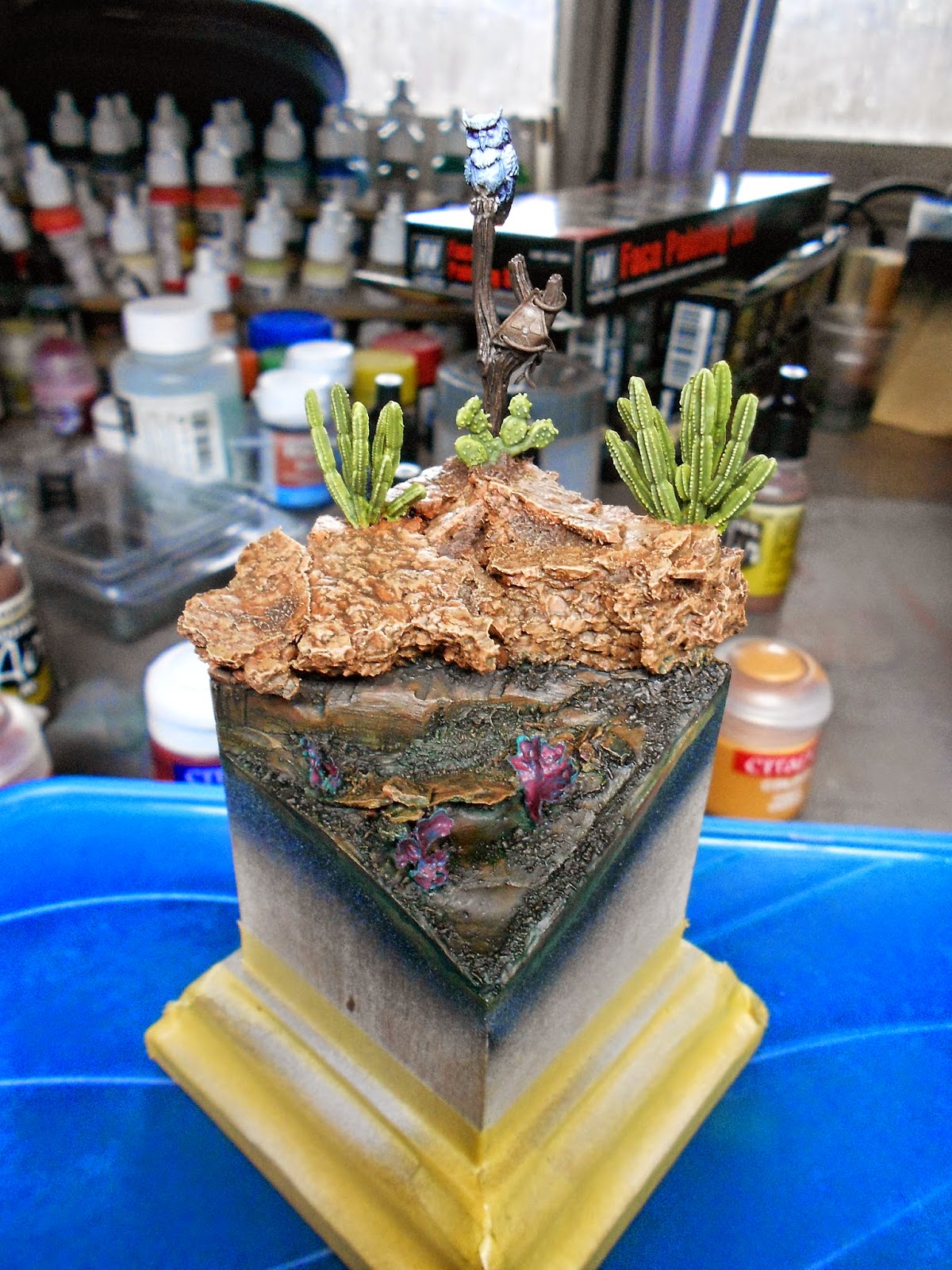 Now it had been time to paint up the rest and  bring a bit more life to the base.
First there was the butterfly which I posed on the robots hand and painted it in yellow .
I painted the owl in the same earth tones then I did the rocks  the fishes and crabs had been done in reddish tones mixed with turquoise for some of the fishes .The swimmer of the fishing pole was made out of a bit of  milliput. 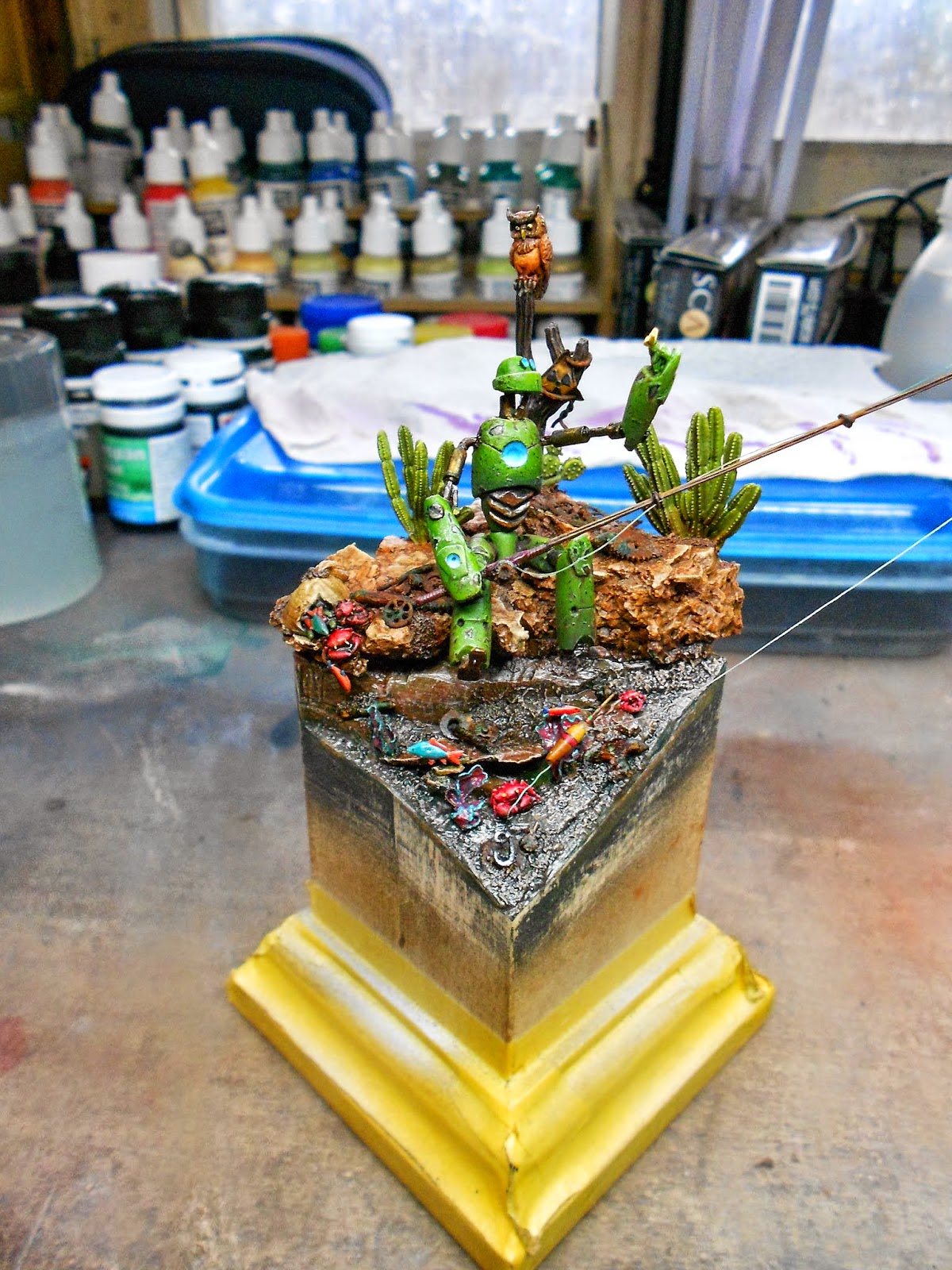 After all the detail work had been finished I got to the most scary part of the whole project to pour the 2 component water.
I tested it 3-4 times , coloured and uncloured and I decided to choose the uncoloured version cause I wanted the paintjob of the riverbed as I painted it and no strange colour variation of course of another colour tone.
When you mixing up these two components , do it very gently otherwise you gonna get a lot of airbubbles into your mix. 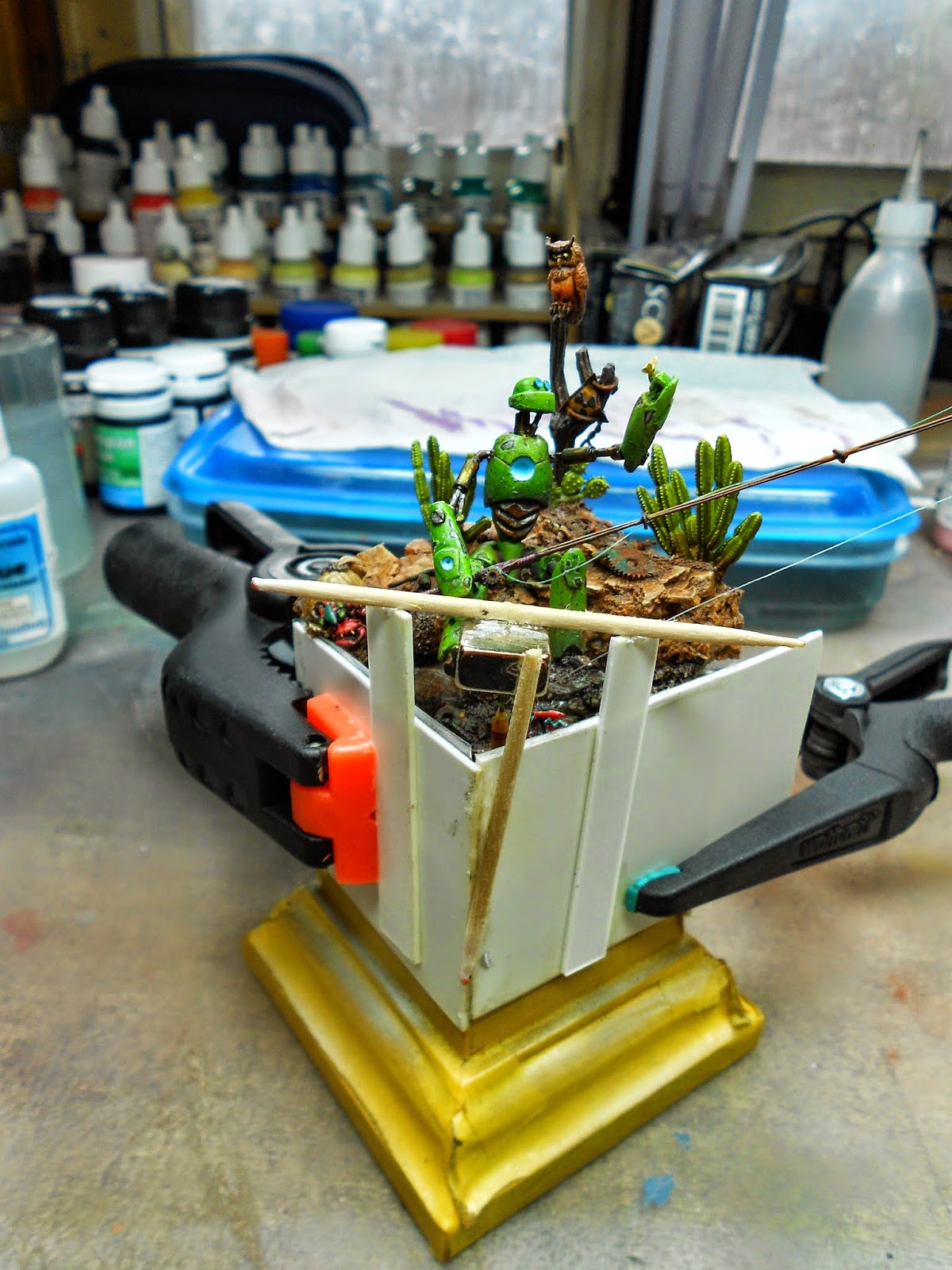 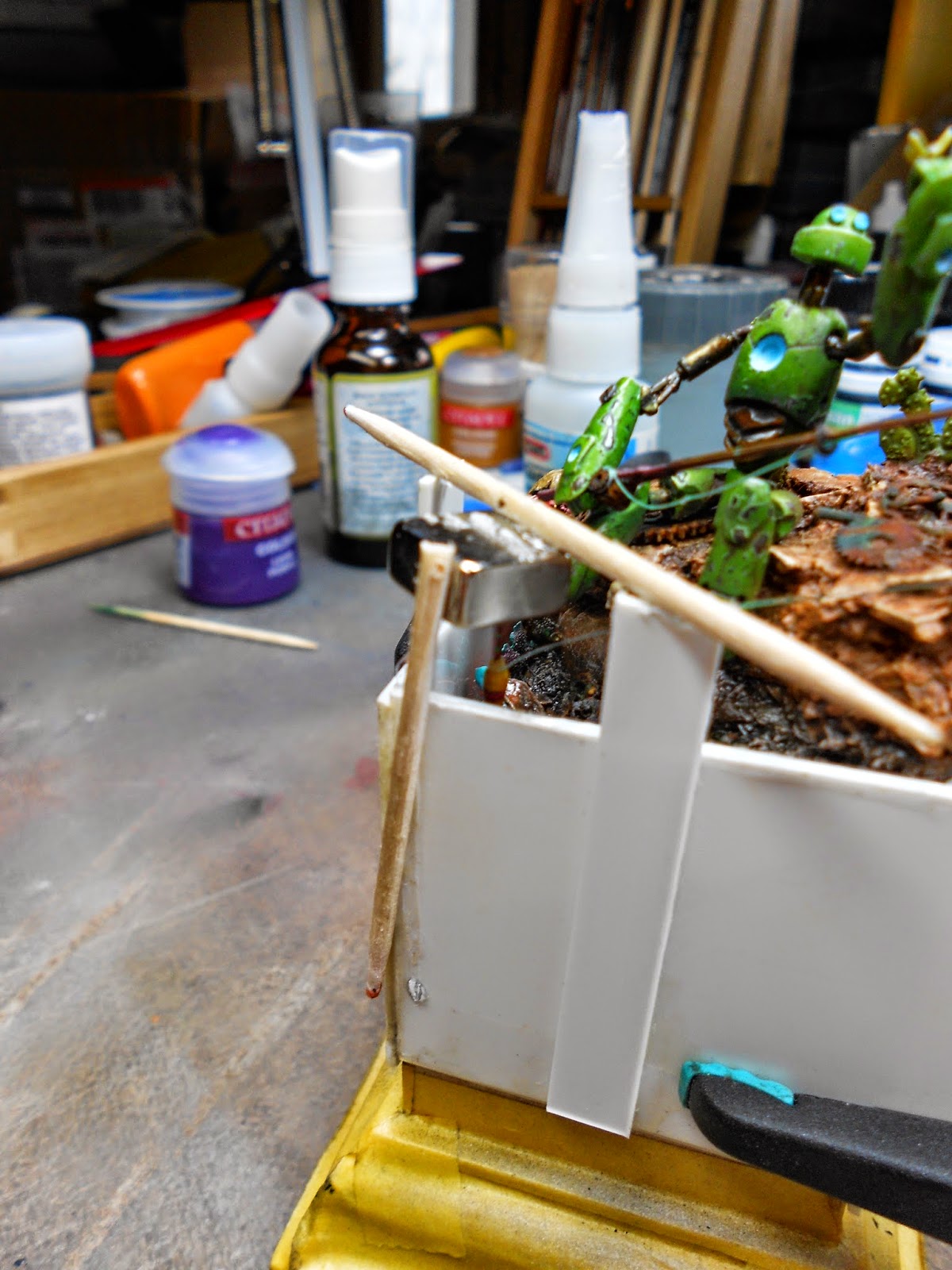 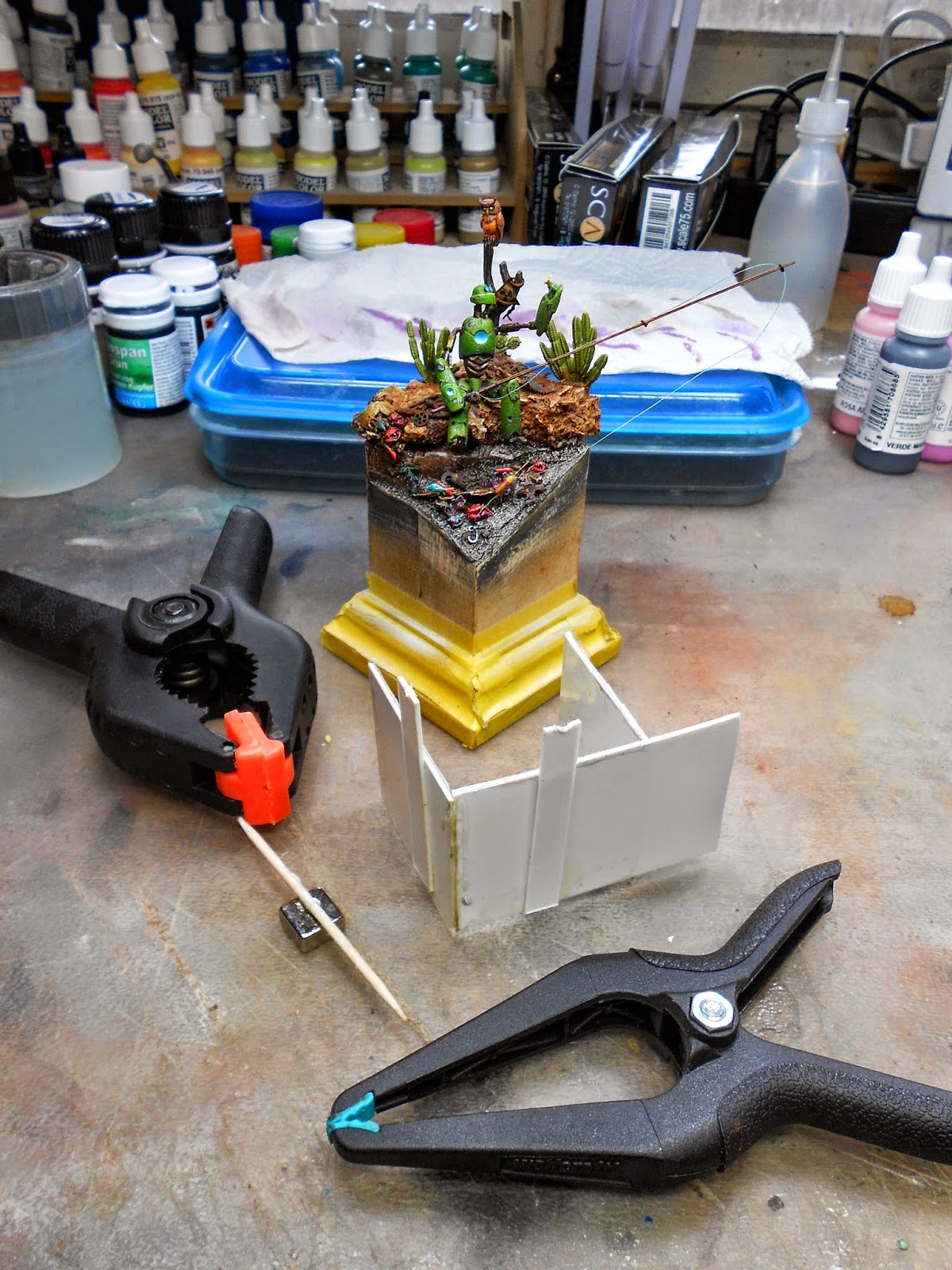 Then I built up a frame out of plasticard and glued also a big magnet on to a toothpick to hold the swimmer of the fishing pole over the liquid , that worked cause I did built up the milliput arround a piece of a accpuncture needle, so thanks to the magnet it couldn`t sank . 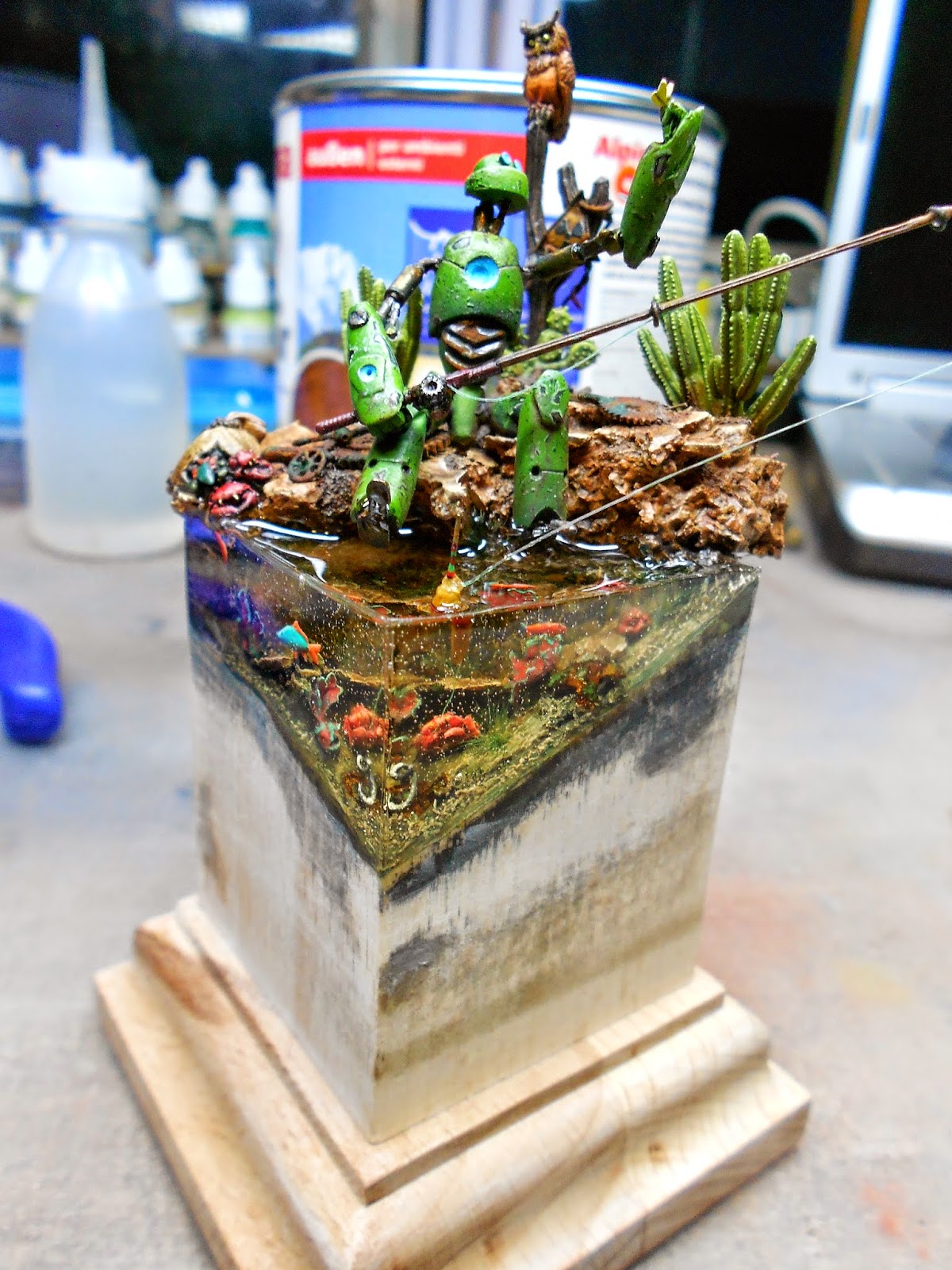 After this worked out  I just polished the resin and and put some glossy varnish on to the polished and matt parts.
Last thing had been glazing the deepest part of the socket with a Brown wood glaze and painted the socket itself in black. 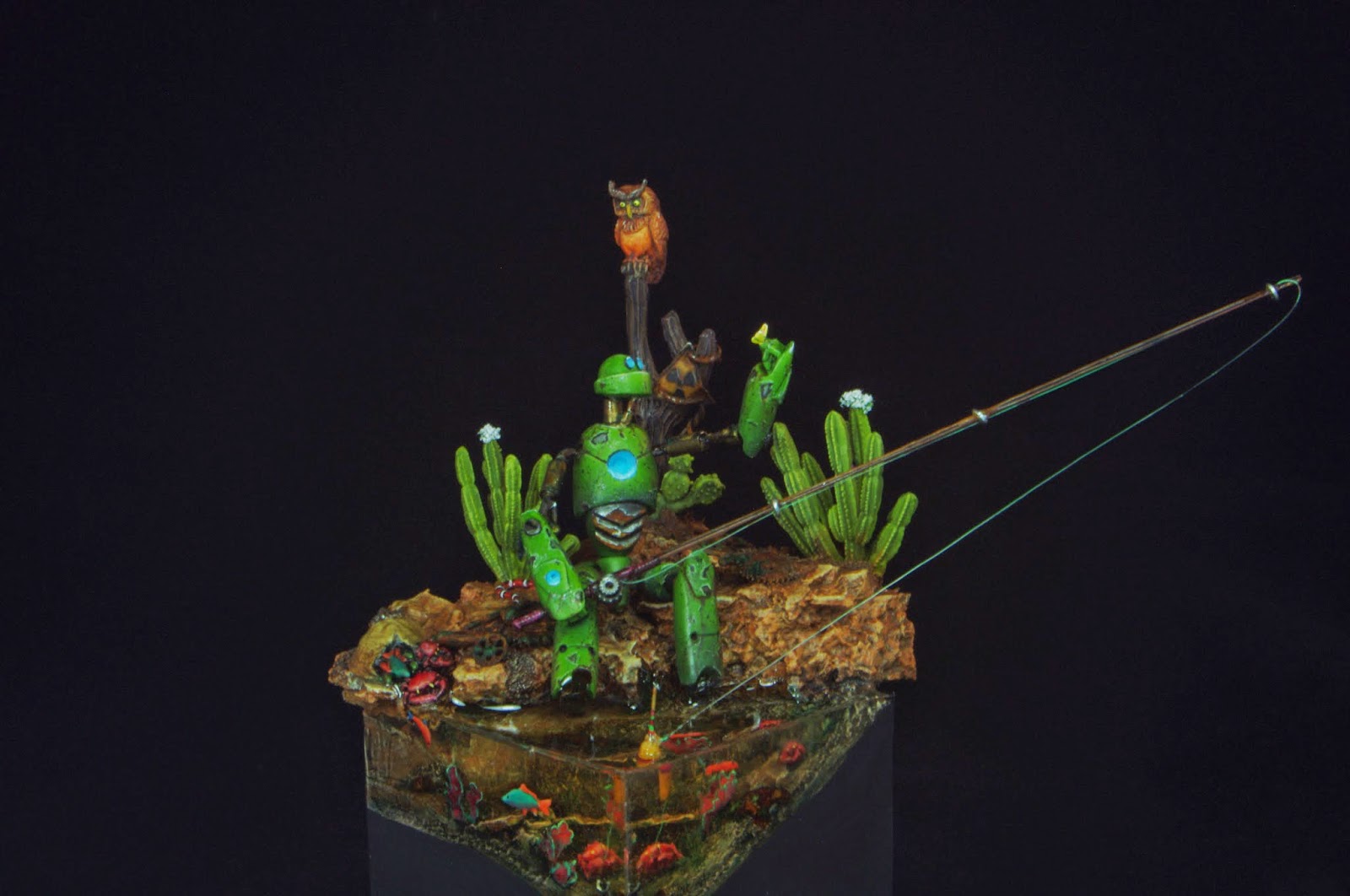 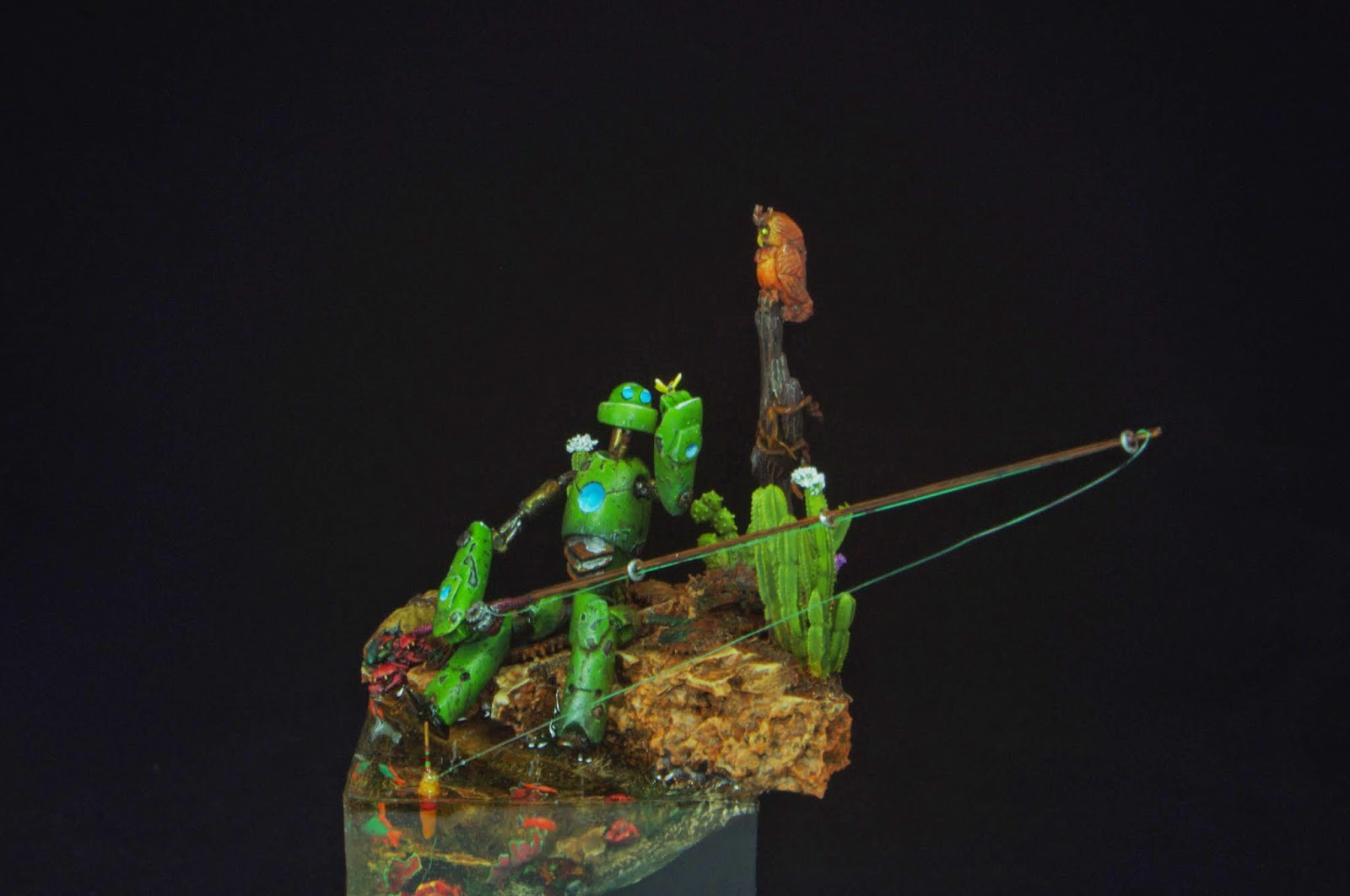 Thanks for your attention.

Here we present the everyday insanity, the daily life of a Wargamer/Painter with all its facets * g *


We want you participate in our projects and ideas and we hope to inspire and entertain you out there a little bit.


With the friendly assistance of

Get this Recent Comments Widget